Colorado is an open carry state, allowing its eligible residents to carry their weapons without concealing them. Of course, as with any other law, there are exceptions and certain stipulations that gun owners should be aware of. In today’s post, we will help break down the Colorado open carry laws so you can carry confidently and avoid criminal charges. At the Law Offices of Murphy and Price, LLP, we have been representing those charged with criminal weapons offenses for decades. We have the skills and experience to defend second amendment rights to the fullest extent. If you’ve found yourself facing gun charges in Colorado, give us a call for your complimentary consultation today.

Colorado has no expressed laws that restrict the right to carry a weapon and is an open-carry state. Unlike a concealed carry permit, you do not have to be permitted to openly carry — meaning it must be in plain view — your weapon so long as you are able to own a weapon and you are not in a restricted area. For the most part. Anyone over the age of 18, not facing legal trouble, and who can pass a background check can own and carry a weapon. Colorado does not have waiting periods nor does it require you to register your weapon. Exclusions apply to some residents who are unable to purchase or carry a gun. Examples of persons who cannot carry weapons, openly or otherwise, include convicted felons, drug addicts, minors, those whose right has been restricted or revoked — red flag law, restraining order, pending criminal charges, etc. —, or anyone under the influence of an intoxicating substance. Additionally, carrying a weapon is your right so long as it does not infringe on the rights of others. For example, your open weapon should not serve as a means of threat or coercion and may not be brandished in an act of force. Violating the rights and liberties of others may result in felony weapons charges. Furthermore, laws restrict ownership or carrying of machine guns, short shotguns, and short rifles.

Where You Can and Can’t Carry

Although Colorado law allows residents to open carry any legal weapon, there are specific areas that have local laws that govern your ability to carry. For instance, the city and county of Denver restrict gun-carrying in any capacity as well as bans assault weapons. Other areas may have local jurisdiction that prohibits weapons on federal property, in courthouses or police stations, municipal buildings, public transit centers, and schools and universities. Additionally, local businesses may prohibit firearms in their establishments and posted placards must be adhered to. Once you cross state lines, you are subject to state law there — although all seven states that share borders with Colorado honor Colorado concealed weapons permit reciprocity and five (excluding Utah and Oklahoma) are also open carry states.

It is important to remember that federal law trumps state law and military installations fall under their own regulations. For instance, Fort Carson and Peterson AFB prohibit open and concealed carry, to include in your personal vehicle. Although weapons do not need to be registered with the state of Colorado, military installations require all weapons to be registered on post. Your military issued weapon is not your personal weapon and you will face federal criminal charges if your duty weapon is misused. Additionally, your personal weapon may not be stored in military weapon’s vaults. Know your installation regulations as well as Colorado state gun laws.

Charges You May Face

Weapons charges are not taken lightly in any jurisdiction, which is why if you find yourself facing any of these charges, you should contact an aggressive defense attorney right away. Some charges you may face related to open carry include:

It is important to note that some charges unrelated to your legally carried weapon may be escalated if your weapon poses a threat or is brandished during another crime including assault, battery, burglary, harassment, child abuse, or sexual assault. It may be considered a threat or form of coercion, whether you intended it to or not. This is why building your defense immediately is crucial. 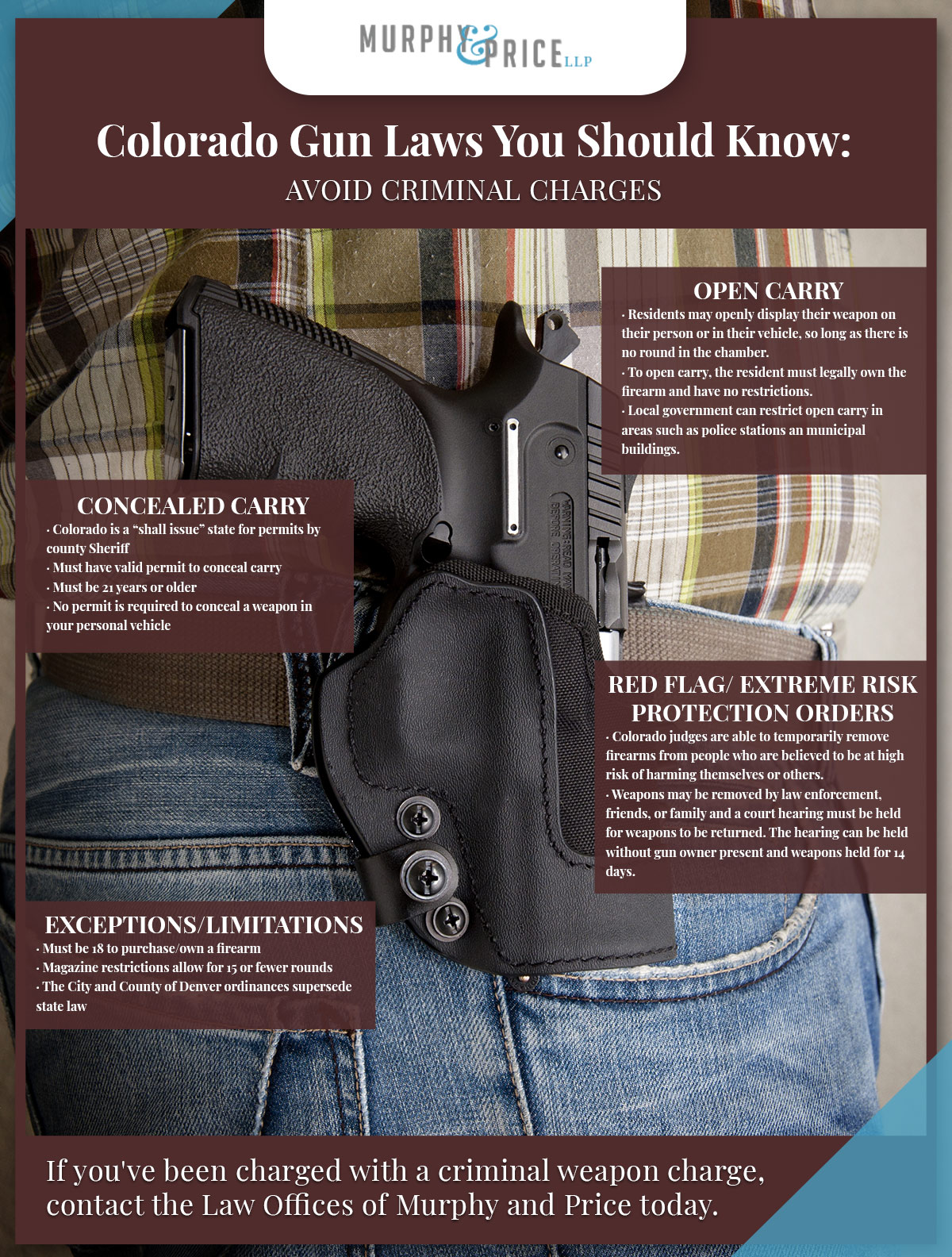 The Defense You Deserve

At the Law Offices of Murphy and Price in Colorado Springs, we have seen the devastating effects that weapons charges can have on your life. If you are facing criminal charges, contact us immediately so we can begin building your defense. We have more than two decades of experience defending Colorado residents, tourists, military men and women, and immigrants. Contact us for your free consultation today.